Last night was Halloween. And last night I made two very questionable decisions. The first was deciding to go out on a Wednesday. The second was a bit worse.

Last night I drunkenly requested to follow my ex’s finsta. 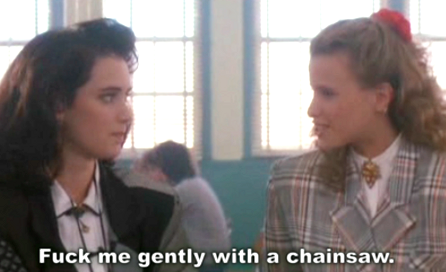 Finsta (n): Short for “fake instagram”. Used for ugly selfies, memes, inside jokes, etc. Usually has humorous names as the username, such as a misspelling of users name.

I repeat: LAST NIGHT I DRUNKENLY REQUESTED TO FOLLOW MY EX’S FINSTA. WHAT THE FUCK AILSA.

Let me start with this: my ex and I are not friends. Up until about 6 weeks ago, we had not had an actual conversation in 4 years. After that, we followed each other on normal Instagram, so I suppose you could say we’re “fine.” But we aren’t friends per se. AND I REQUESTED TO FOLLOW HIS GOD DAMN FINSTA. Good one, Ails.

I’d like to thank the academy, my agent Madison (who appears as the alien below), the lemon drop from One and One, the vodka red bull at Pianos, the two bud lights at The Red Lion, and that free tequila shot that bartender at HOTD gave us because she liked my Dancing Queen costume. 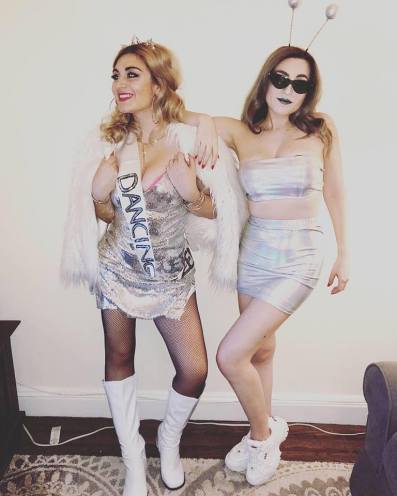 So here I am, sitting on the subway (yes this is a common theme, public transport seems to get my creative juices ~flowing~), with a wild wave of humiliation washing over me. As well as a pretty solid wave of nausea because fuck me I’m 26 years old and still insist on mixing my alcohol. Now, I know this is not the end of the word. Yes, I’m sure he’ll see that I sent it at 3AM and will have seen my story filled with videos of my friends and me out at the bars and realize, oh snap she’s shitfaced (what a loser). I will keep repeating to myself WHO CARES WHO CARES WHO CARES until I get home and can drown my embarrassed feelers in a 3 hour long Sabrina binge fest in a PJ set and some apple cider.

Wowzers I really feel like I may Ralph. Hangover or follow? Who knows friends, who. Knows.This is, of course, not the first stupid drunk thing I have done. Cmon if you have read any of my other posts I’m sure you can figure that one out on your own. Do I have a small drinking issue? Maybe. Do I feel like dealing with it right now? N- okay also maybe.

Much to your dismay, I will not get into that right now, and I will also not list out all of the dumb things I’ve done while under the Vinfluence, because 1) there are a LOT and 2) they’re all really stupid and would probably make me feel the need to reassess my life and TBH I’m entirely too hungover for that right now. However, they’d probably make you feel a lot better about yours.

ANYHOW: I’m turning this post into my formal plea for all sorts of communication devices to have a built-in breathalyzer. Or an app. Could we make an app? Who’s with me? All I have to do now is find someone who can code…and figure out how one could breathe into an iPhone. Or maybe one day Siri will actually be able to see us, and she could tell us we need to walk in a straight line or to touch our nose, or whatever it is cops do when they pull drunk people over.

Ailsa: SIRI TEXT THAT CUTE GUY FROM WORK AND TELL HIM I WANT TO HAVE HIS BABIES

Siri: Ailsa, before I do that, please proceed to walk in a straight line until I tell you to stop

Ailsa: *walks two steps before tripping over self and face planting at the bar*

Siri: Yeah bitch, that’s what I thought. *turns phone off for the night*

See? Totally a good idea. That would have saved me from some really psycho and awful texts I sent my high school “boyfriend.” (If you ever see this, I apologize for being a crazy person when I was 17.) It would save us all a lot of trouble.

And now I’m off to google “how to create your own app.” Or at least find someone to pay to make it for me. And you know, to curse myself a bit more for REQUESTING TO FOLLOWING MY DAMN EX’S FINSTAGRAM.

“Too much of anything is bad, but too much Champagne is just right”
– F. Scott Fitzgerald

3 thoughts on “The Idiot’s Guide to Drunk Social Media”