How to respond when asked why you quit your job:

I’m going to become a professional dog walker. I already have four golden doodles lined up in Park Slope.

I got a job working as Elon Musk’s space monkey’s assistant.

I decided that the social confines of a “job” were just not working out for me. I’m a free spirit. I can’t be expected to just show up to an “office” at 10AM on Monday-Friday.

I’m following my dream of being the next Rachael Ray.

I’ve been cast on the next season of “The Bachelor” and will therefore be devoting all of my time to becoming a social media influencer and trying out different fit teas.

I’m going back to school to major in Bagpiping at Carnegie Mellon University.

Just kidding, I’m going back to school to major in Citrus at Florida Southern College.

I got a gig working as Lady Gaga’s Make Up Artist’s afternoon smoothie maker.

I’m joining the Bumble team as their foremost expert at dating in the NYC area.

I’m moving to Bali to be an amateur surfer.

I got a sugar daddy and have no need for income of my own.

I’ve been recruited by the CIA. Calzone Improvement Association.

Harry Styles and I met at a bar on the Lower East Side and he immediately fell in love, proposed, and asked me to come on tour with him.

I’ve decided that the climate in New York wasn’t cutting it for me anymore and have decided to move to the Siberia.

I’ve decided to pursue the art of Wicca and join a coven of witches in Prague.

I’m going home to Kentucky for a few months because I’m really sad and can’t deal with holding any sort of responsibility, or with the city of New York right now.

Not as glamorous as the others.

What am I doing? Why did I do this? Is this the right decision? Am I going to regret this for the rest of my life? Am I going to look back in 10 years and think this is one of the best things I’ve ever done? Can I get away with wearing this sweater one more time before washing it? Do I have to hand wash it?!?!?

I have decided to take a great big ole leap of faith and quit my really cool job. The job that seems so awesome and amazing to all of my parents’ Facebook friends. The job that has allowed me to be wearing a “backstage pass” in Times Square on New Year’s Eve, and standing on the Capitol Lawn during the fireworks show on the 4th of July (when Obama was in office, of course), and be interviewed by Dan Rather, and watch the Tonys rehearsal sitting with Lin-Manuel Miranda. Ok, yes, I will shut up now. But it’s been one very cool experience after the other, and now it’s coming to an end. And I’m not totally sure if that’s the right decision.

But I think it must fall closer to good than bad because for the first time in a very long time I feel like there mayyyyyyy just be a light at the end of the tunnel.

One week ago, I wrote this:

I can’t write, I can’t clean my room, I can’t do my laundry.

Until a week ago I couldn’t read.

I love to read

Depression is a bitch.

But I think things may be getting a little better. In the time since I wrote that I’ve read a full book and am halfway through another. I did my laundry. I mostly cleaned my room. I’m getting there. And I went to dinner at a stranger’s house!

Why am I including this? I promise there’s a reason. It was this thing called “The Dinner Party.” I describe it to people as a cool bereavement group for millennials. It’s this incredible community of people in their 20s/30s who have all experienced great loss, and who get together in small groups once a month and have dinner together and talk about “The Shit.”

THE SHIT (noun) All of the really crappy crap and feelings and decisions and mood swings and physical changes and stuff that you can’t really identify but are dealing with anyways that comes along with someone really close to you dying.

Two Sundays ago was my group’s first Dinner Party. None of us had met before, but we all agreed to go to someone’s (really cute) apartment in Brooklyn and eat and drink together and bare our souls. I was nervous. I knew that I probably wouldn’t be the only one who felt that way, but still. It seemed daunting to talk about the things that make you broken in front of a group of strangers. But turns out we’re all broken because of the same thing. And it turns out it wasn’t daunting. It was really awesome. And I think it was the first time in a long while that we all, a group of 10 strangers, felt truly understood. That was really cool.

Yes I know, I still have not addressed the whole quitting my job and moving home thing. I’m just going with whatever comes to mind right now and at the mo I’m feeling a bit scatterbrained. But simply put, I need a break from forcing myself to be okay. And a break from this city. And a break from having to actually “do work.” So I’m going home to cry on the couch for two months. And to read and to write and to paint and to cook and watch the full Game of Thrones series before the final season ends and to maybe not brush my teeth every day.

I don’t know what the plan is after that. In the wise(???) words of Kylie Jenner: “I feel like this year is really about, like, the year of just realizing stuff. And everyone around me, we’re all just realizing things.” So off I go to Kentucky to “realize things.” AKA figure my shit out. 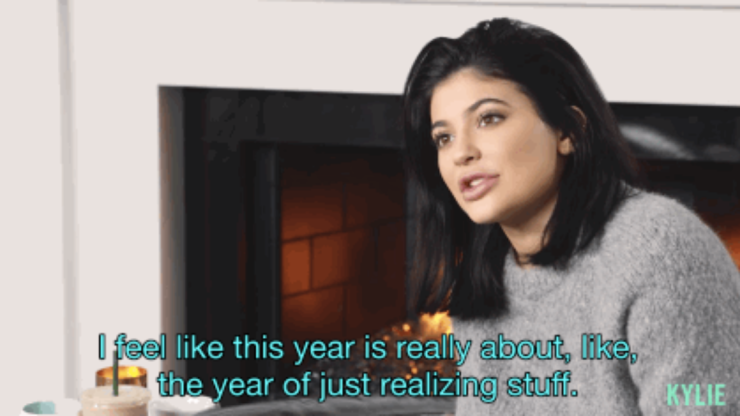 I am not moving to Italy to make cheese. I’m not going to be an expert Bagpiper. I don’t know anything about Wicca and don’t plan to practice witchcraft, even if the silly fantasy book series I’m reading has me wishing I could. BUT I am buying into this whole ‘self-care’ thing. Which, apparently, is pretty legit…

Don’t kill me for leaving, Mom. I’m not giving up. I promise.

Author’s Note: I do not think Kylie Jenner nor her words are wise.

–  Kylie Jenner getting lip injections / me dealing with my depression